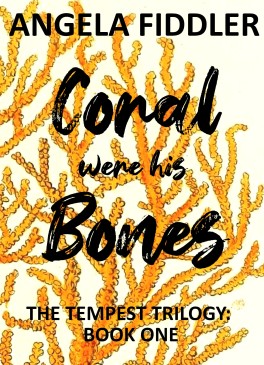 Finn grew up knowing selkie stories end in tragedy. Being a mythical shape-shifting seal leaves you vulnerable to having your heart stolen in a much more literal way than most. Finn was trapped a decade ago. Working for and sleeping with his cruel master has been Finn’s life for a decade. He’d grown up ready to spend the rest of his preternaturally long life with Devon, the boy next door, but now Finn’s more dead than alive, trapped in his memories of what was, not what could have been.

On Finn’s annual day off, Devon knows if Finn goes back to his master, he’s as good as dead. But Devon’s plan to save him isn’t fully formed yet. An impossible storm, an ancient one-eyed shark and a mysterious selkie with his own agenda all chase Finn and Devon up the coastline. Getting home alive is the first step in dealing with an ancient curse, but they both need to learn that it’s better to trust the other than sacrifice themselves. Finn has gotten used to losing, and his worst buried memories are just surfacing now. In the time he has with Devon, can he gather his strength to save himself?

Less than a week ago, Finn traded away the rest of his supernaturally long life for two weeks with his boyfriend Devon. Finn is a shapeshifting seal straight out of an Irish folktale who had to give his heart to a cruel master a decade ago. Devon may be the boy next door, but his stepmother is a witch who thinks she can break Finn’s contract. Finn’s master Paul, though, isn’t going to give up easily on the near-immortal life a selkie’s heart grants him.

The more time Finn spends in Devon’s lavish care, the more he remembers that sex was meant for pleasure. Finn wants the sting of a riding crop and something shiny around his neck as a token of Devon’s affection. He can’t go back to Paul’s sexual servitude now. With Finn’s new resolve comes magic powers that he’s going to need, because the stakes for Paul are higher than Finn realizes. The deal that binds Finn is backed by the powers of a sea witch with the strength of the Pacific Ocean. If Finn is late, Paul will make sure he can never swim in open water again, and if he runs, he’s dead.

#0.5 – SOMETHING SHINY IN THE DISTANCE

This story takes place eight years before Coral Were His Bones starts and is a crossover prequel with the Past and Present Tense series.

A selkie and a drag queen walk into a wildlife preserve cabin… and a long forgotten debt brings two strangers together to save a life.

Finn doesn’t know if all mythical shape-shifting seals are drawn to bright, shiny things, but it’s definitely one of his weaknesses. Something has been drawing him home to Victoria all week, but when he spots a flash of light on one of the islands off the BC coast, he realizes that what’s been calling him isn’t home at all. Ren has always known that he’s going to die young, and has lived his life accordingly with all the glamour and flair he can possibly cram in, both in and out of drag. He can feel the end coming near, but his grandmother once told him that when death was creeping up, to go to the beach and let his presence be known. The silver sequined gown that’s catching the light might not be his best dress, but it’s definitely his shiniest. Larger powers are at play than a lone selkie and a fabulous marine biologist could ever know, and a passing encounter may just be what they both need, for a glimpse of hope and a second chance before time runs out.