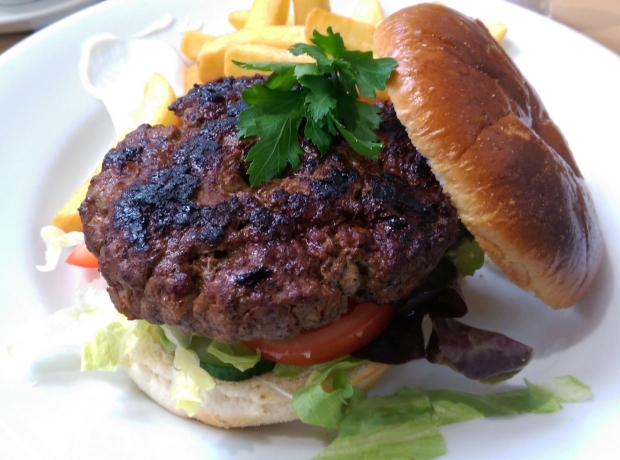 This is a recipe that calls for Ron Swanson’s recipe for hamburger, cooked to Canadian squeamishness about not wanting to eat rare ground meat. It calls for beef and salt. When it comes to toppings, I strongly suggest mayo, good mustard and grilled sweet onions only.

Buy lean meat, not extra lean. It should be 80/20 meat to fat. One pound of meat should make three good sized patties, 5-6 ounces each. Don’t overwork the meat. Just separate the beef, form it into loose patties with a slight dimple in the middle and salt both sides with kosher salt. When I used to make burgers before, they would always fall apart when I cooked just beef burgers, so there’s a couple tricks to keep them together. The first is after you’ve loosely formed them and salted them, put them back in the fridge for 30-60 minutes. This lets the meat glue inherent in the protein a chance to knit the fibres together. Don’t cook them on the BBQ grill. If your BBQ has a side element, cook them in a  cast iron frying pan. Get the oven/bbq proper up to 350 degrees while you’re preheating your pan to medium high.

Put your burgers in a hot pan. Without oil on the bottom, you should be able to lick your finger and have the spit boil off before you burn yourself. Oil will cook your finger instead, so don’t do that. If you’re not cooking for family, a couple drops on the pan should dance and boil off.

Put the burgers down and set your timer for five minutes. Flip and add the tiniest sliver of butter on top if you’re not worried about boiling in the milk of the mother. Cook for another five minutes and put the pan into the oven/bbq for 5-10 minutes, or until an internal temp of 155-160 is reached.