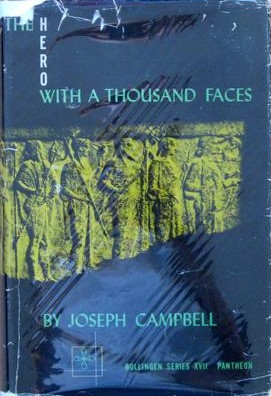 I was watching Extra Credits, because everything they say about the narrative of a story translates almost perfectly into writing, when a Joseph Campbell quote summed up perfectly a problem I’ve been having with most first drafts of most of the books I read. The mundane is too boring in what should be an exciting world.

Books in the speculative realm all too often focus on the boring mundane moments in the story. The bathing, the eating, the walking…even if it’s the person’s job to kill other people, quite often they are bored with it in the wrong way. Apathy is a hard emotion to write in a way that is engaging because if the character does not care, it is very hard to get the reader to care, either. Visual media is slightly different, but that too cool for school character that just cannot be assed has been used to the point where they’re a paper-thin representation of what the character could have been.

I think this can be fixed by starting at that moment where the story is new to the character and you see that wondrous world emerging from what the character has known all their life, and watching *other people* be blase about the magic or technology allows the reader to have that bridge between the readers who have never seen it before and the world where the tools are common.

Balancing awe vs. mundane is not a first draft issue though. Too many students have sat in too many classes talking about in media res that now we have a flood of stories that are starting after the character has already rubbed off all the awe, and they’re now just plodding along.

I don’t want to read characters plodding. I want them to bring me into their world with them. If scenes can be summed up in a few lines as to what happened but doesn’t change the plot itself, it should be nothing more than a bridging scene. No more chapters of characters doing everyday things unless that every day thing is a break from their new reality and even then, be brief.