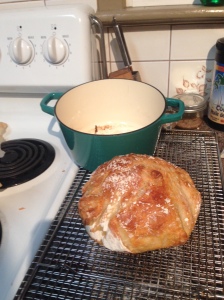 I’ve  been playing with sourdough starters for about two years now, but this recipe can be made with just commercial yeast, no problem. The special bit doesn’t come from the yeast, it comes from letting the yeast, flour and water do its thing for a bit before introducing salt to crash the party. Things were salted to preserve them, killing the micro-organisms that like the food we do, but in this case, we want the microbes to party and salt is the parent in the room, frowning at your life choices.

Regularly feed your starter 4:3 by volume,  using tap water that has been left on the counter for 4+ hours so that the chlorine evaporates. It’s done its job, now you need to protect the microbes.

Take X units of unfed starter. This is a ratio, so it doesn’t matter the unit or the amount, but easy to remember multiples of three is best. 5 ounces of starter makes a good size loaf, 10 ounces makes three loaves) The recipe follows a simple 1-2-3 ratio. I’m going to assume a 5 ounce starter from now on.

Add 10 ounces of dechlorinated water and stir well. Then add 7 ounces of flour. You’re going to be adding 15 ounces all in, and its easier to stir less flour in at this point than more. This skips the step of feeding the starter an hour before you start making bread. Just like you would wait an hour from feeding it to starting the bread, now you’re spending 3 minutes with the scale adding the starter, all the water and half the flour. I do this when Elisabeth is making the coffee and we finish at about the same time. In the same bowl with a good scale this takes about a minute and a half, all in. I like a mix of AP and bread, so put all bread in at this stage then add the AP in stage two or use all of either. It’s a forgiving loaf. Don’t use a metal bowl to let the bread sit in; mixing is fine, but it is acidic and metal reacts badly. (*such a drama queen*)

Go away for an hour to 90 minutes. When the time is up, add the other 8 ounces of flour, 1 1/2 tsp of salt (every 5 ounces of starter needs 1-1 1/2 tsp salt, added at the last minute. Salt and yeast are natural enemies. Doing the dough in two stages lets the flour absorb the water without the salt doing its thing to hamper the process. I wouldn’t do this step if the results weren’t noticeably different. They are. You can skip the sourdough and just mix the flour and water 3:2 where half the flour is added now to make a batter and the other half is added with the salt. No difference. All the starter is is water and flour with some sour bacteria that the yeast doesn’t have.

Now, mix the dry flour and the salt together if you can, or on top of the batter if you can’t. Using the back of a spoon or a bread whisk, mix everything up until there is no more clumps of flour visible. Don’t knead, just mix. Spray with a water bottle if it’s looking a bit dry due to the humidity of the day, but you measured the flour and water pretty accurately. It should be okay.

Let sit out for 8-12 hours. 12 better than 8. Overnight works great (but not if you start it at 2 am). Take out a clean bowl, tear off a sheet of parchment paper, and dump the lump of dough onto the parchment paper. This is its final baking form. If you’ve made more, put what you’re not breadifying now into a chilled spot, then when you’re ready to bread, bring to room temperature and put in bowl on parchment paper.

Let sit for 8-12 hours. I used to say don’t do two long rests on the counter, but it is the only way to get fluffy bread that isn’t dense. If everything is clean and you’re not adding anything but flour and water, you should be okay. Any enriched doughs with eggs or dairy should be allowed to rise in a cool place the second time, but the starter sits out all the time and it’s fine.

When ready, it should be a beautiful pillow you just want to put your face on, but don’t, because that is gross. Preheat a pot with a lid; ideally enamel cast iron and going down to any (high temperature) oven safe pot with a heavy lid. A lot of non-stick is only good up to about 375 and we’re cranking this baby up to 500 degrees. You’re going to be moving it around and baking it on the parchment paper, so it doesn’t have to be enameled, nothing is going to stick, but it retains the heat the best. Preheat the oven, the pot and the lid for 30 minutes at 500 degrees. If the oven gets to temp sooner, just chill. The iron will take longer to absorb the heat, and you’re making a *tiny* bread oven in your oven with the pot.

At the 30 minute mark, slash your loaves if you remember and if you don’t have a good enough knife or lame, (that’s la-me, french for a straight razor holdery thingie) use kitchen sheers. Snip/slash the loaf so it can expand, but I’ve forgotten to do this multiple times and the crack, like life, will find a way. It’s delicious chaos theory.

Bake 30 minutes at 500 degrees, uncover, turn oven down to 350 degrees and finish baking for 20 minutes. Remove from pot, peal off parchment paper that saved you from having to scrub a second bowl, and LET IT COOL COMPLETELY.

No joke. LET IT COOL COMPLETELY. Yeah, melted butter on oven fresh bread is awesome, but at what cost, man. At. What. Cost. (It will cause a lot of the moisture to escape and, if the starch in the center isn’t completely set when you take it out of the oven, you’ll get gooey center syndrome, to which there is no cure.

This loaf can take care of itself. Leave it tipped up, cut side down and have fresh bread/toast for up to three days. If you are honest with yourself and you know that not even you or your family can eat it in three days, slice it up the first day and freeze in the individual slices in the freezer. They toast up beautifully. Bread that had the best intentions but wasn’t frozen and goes into the fourth day makes the best french toast.