To celebrate the release of my new book, Coral Were His Bones, I’m going to be posting a month’s worth of things about selkies. Coral is a m/m paranormal erotica novel about Finn, a selkie who’s in love with his childhood sweetheart Devon, but bound in a magical contract to a cruel master. It’s a story of modern magic, snark, sex, and how to heal when everything hurts.

Today’s pick is pure CanLit, albeit of the magical realism flavour–Selkie by BC author Anne Cameron. Her stories are often narratives of abuse, narrative, and the survival and resilience of the human spirit, frequently with queer and aboriginal characters. I like her books, but have to take a break in between them to read something lighter. 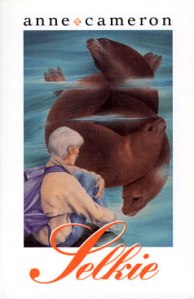 “One morning it starts raining in Cassidy’s house, and nobody can get it to stop. Like everyone else, Cassisy figures it’s just a problem with the pipes. She doesn’t know that she’s about to embark on the ride of her life. She doesn’t know that before the year is out, she will have wound up in hospital with every bruise and welt from her twenty-year marriage showing on her body, and survived a surreal whale-watching raft accident, and travelled through lifetimes and constellations, and written her life story into a salt-encrusted rock on a deserted beach. Even more strange and wonderful, she will have experienced the selkies, those mythical creatures, half-seal, half-woman, who swim through the deepest waters of every woman’s heart.”